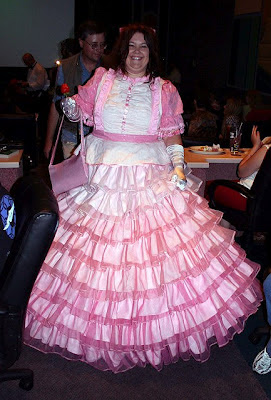 We sold 195 tickets at $10 each. We also had 6 guests. The theater seats about 200, so we were packed! We took in $319 in raffle tickets and donations. Our expenses were $528.71, which included $250 for the film, $70 for shipping the film, $88.05 in Pay Pal fees for selling pre-sale tickets online, $17.71 for fliers, $14.00 for event programs, and then $88.95 for various raffle prizes, but most of our prizes were donated. Advance tickets were sold, and seats were sold out two days before the event. We did not sell any tickets at the door. However, the theater told us that they had people calling and coming to the box office to try and buy tickets the day of the event. I also heard from several people who attended, saying they had friends and coworkers who wanted to attend but didn't buy advance tickets and ended up missing out. I also heard that many people thought 'there'd only be 30 or 40 people' showing up - many folks (including the media, I think) were surprised we sold out ahead of time!

Please support the sponsors and contributors to our event, and thank the individual folks who have made this happen! They are Big Damn Heroes!

Q: Who put on this event? Flame (J.L. "Jen" Hilton) coordinated this event. Which means she spent a whole lot of time sitting in front of the computer answering email, creating and updating this website, soliciting donations, designing fliers and programs, talking on the phone, monitoring ticket sales, and sending out press releases, while her two small children destroyed the house and watched Spongebob. She had an incredible amount of help from the local and worldwide Browncoat community. If Flame is mighty, it is only because she stands on the shoulders of some Big Damn Heroes.

Q: What happened during this event? Everyone got a strawberry handstamp, we gave away lots of door prizes, held a costume contest, raffled off some goodies, displayed a prop from the movie, ate, drank, and watched SERENITY. Everyone in our theater cheered the first time Wash said, "I am a leaf on the wind."


This is a list of the DOOR PRIZES given away during the event:
TITAN BOOKS FIREFLY OFFICIAL COMPANION VOL. 1
SERENITY DVDBedlam Bards On the Drift CD
Killer Angels (the Civil War book that inspired Firefly)
SERENITY movie poster, unframed
Serenity t-shirt size L from Lilac Trading Station
Serenity novel
SERENITY: The Official Visual Companion, Joss Whedon
VFCorporation donations including: Nautica Mens watch and Nautica womans watch (value $75), The North Face Borealis BackPack, Kipling purse (value $65), Vans Skateboard, Buddy Lee Bobblehead doll (sorry, it's not a wobbly-headed geisha, but you can dress him up!)
The American a novel by Raleigh resident Andrew Britton, and a CD of Irish music, from IrishEventsNC.com

These are the RAFFLE PRIZES given away:

We also put together nine character gift baskets, one for each Big Damn Hero on the crew. These were raffled off the night of the event. Every basket contained items related to the character or a line the character says, and all baskets totaled a value of AT LEAST $30 - most of the baskets were worth $40-$50 or more.

Browncoats worldwide have raised more than $1 million for charity through CSTS.

Jen Hilton, who organized the first three Raleigh screenings in 2006, 2007 and 2008, was interviewed by Sending a Wave, a UK-based Browncoat podcast, about the Raleigh event and her 6 years participating in CSTS. Click here to listen... (she appears about 3/4 into the program).

When the renegade crew of the spaceship "Serenity" agrees to hide a fugitive on their ship, they find themselves caught between the relentless military might of a totalitarian regime and the bloodthirsty creatures who roam the uncharted areas of space.

The movie "Serenity" is the continuation of the tragically canceled 2002 TV show "Firefly," from the mind of Joss Whedon, creator of "Dr. Horrible's Sing-Along Blog" and "Buffy." Even now, many years later, the show's fanbase is still growing ... and still flyin'.