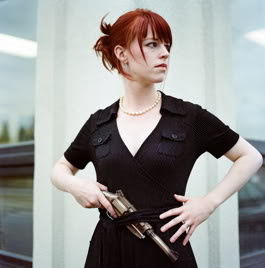 OFFICIAL BIO: Singer and composer Marian Call became a fan of Firefly and Battlestar Galactica fairly recently, though she's been a certified geek since birth. Like many inspired fans, she turned her artistic bent toward her new obsessions. The result is a tribute album full of new and remastered songs, all dedicated to the spirit of the shows she loves and published exclusively by Quantum Mechanix and Black Market Beagles. The songs on Marian's new album "Got to Fly" are inspired by Firefly/Serenity and Battlestar Galactica, and by the fans and friends she's met by coming out of the closet as a nerd. Marian Call delivers whimsical Alaskan folk funk for the Coffee Counter-Culture. She sounds a little like Joni Mitchell & Regina Spektor raising the child of Jason Mraz & Erin McKeown. Call’s sound is always soulful, honest, and clever, loved by all types — computer geeks, church ladies, teenage thugs, NPR listeners, and urban hipsters worldwide. Marian is currently touring all 50 states.

Browncoats worldwide have raised more than $1 million for charity through CSTS.

Jen Hilton, who organized the first three Raleigh screenings in 2006, 2007 and 2008, was interviewed by Sending a Wave, a UK-based Browncoat podcast, about the Raleigh event and her 6 years participating in CSTS. Click here to listen... (she appears about 3/4 into the program).

When the renegade crew of the spaceship "Serenity" agrees to hide a fugitive on their ship, they find themselves caught between the relentless military might of a totalitarian regime and the bloodthirsty creatures who roam the uncharted areas of space.

The movie "Serenity" is the continuation of the tragically canceled 2002 TV show "Firefly," from the mind of Joss Whedon, creator of "Dr. Horrible's Sing-Along Blog" and "Buffy." Even now, many years later, the show's fanbase is still growing ... and still flyin'.